The Science Factor competition was instigated several years ago to offer high school students the opportunity to design innovations that are useful to society and the environment and so stimulate scientific vocations, especially among girls.

One of the 2016-2017 finalists, “The People Connect” is a mobile application project, accessed via a flash code placed on restaurant tables, which allows restaurant customers to find out what is on the menu, order and pay in the blink of an eye.

Behind this super idea are Flore, Marine, Thomas and Eloi – four teenagers from the Saint Paul secondary school in Charleville Mézières, in the Ardennes, and their supervisors, Fabrice Thomas and Isabelle Schmolinski. We met them a few days before the presentation ceremony which took place on 7 March.

An application for restaurants

“We thought it would be good to come up with a project and carry it through to the end,” says Flore, the team leader. She was behind the idea for “The People Connect”, a project she developed with her friend Marine. “At first, we wanted to create an application that would tell you how to dress to suit the weather,” she continues. “After a month, we realized that one already existed, so we had to start again from scratch. I was in a restaurant in Paris and found the wait really long. So I figured why not come up with an application that could be used in restaurants…”
The girls were soon joined by Thomas and Eloi, two students in the high school audiovisual class, who shot and edited a short film demonstrating “The People Connect” app. “Flore and Marine didn’t really have the resources they needed to present the application,” explains Éloi. “So, Mr. Thomas appealed to students in the audiovisual class. Thomas and I volunteered.”
Very involved, the four students are actively involved in promoting their project: “We went on the radio, and were in the newspaper L’Ardennais, We printed flyers that were distributed on the street, we shared the project on our respective social networks and we set up a Twitter account,” says Thomas.

They also had discussions with restaurateurs: “They could see the disadvantages – like the risk of losing the link between the customer and the servers – but they also saw the benefits, such as saving time for customers, servers and kitchen staff. That’s what we were looking for with our application, so we were pleased,” explains Éloi.

Science Factor and beyond

Fabrice Thomas is very proud of what his students have accomplished: “I enter competitions with the students almost every year and I am very pleased with these young people; they are motivated and managed to pool their different skills. For me they have been all the more courageous because they’ve done it all in their spare time,” he says.

The teenagers agree that the Science Factor competition made them more mature, enabled them to overcome their shyness and gave them a lot in terms of taking initiative. “They are rather reserved. Talking to strangers is not easy for them,” says their teacher. “They really jumped up a level by managing to explain their project to people.”

As for the Science Factor rule that teams must be led by a girl, Flore thinks it’s helpful “because boys often want to be leaders and girls don’t always get to have a say,” she explains.

Although in the end Flore, Marine, Éloi and Thomas didn’t win the 2016-2017 Science Factor competition (the high school prize went to the Serrotonines team for their urban agriculture project), the four teenagers don’t intend stopping there. Their teacher told us that a company that is interested in their application wants to help them continue the adventure. 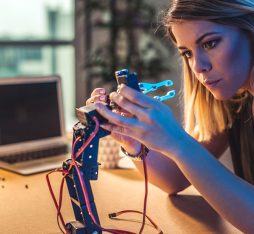