More and more people and businesses are storing their data and deploying their applications in Cloud computing infrastructures that offer the advantage of powerful, flexible and inexpensive computing resources. The massive adoption of these infrastructures that concentrate sometimes sensitive data and applications makes them a prime target for IT attacks, hence the importance of security monitoring in the Cloud. Yacine Hebbal and Sylvie Laniepce, Research Engineers in Orange’s Security Department, present NoGap, a new security monitoring technology that operates from the Cloud infrastructure. From the hypervisor [1], NoGap allows the reconstruction of the activity of Virtual Machines hosted in the Cloud from a binary view to a semantic view and exposes this view to applications, in particular security applications, to detect intrusions for example. This makes it possible to envisage two families of NoGap applications: new services based on the hypervisor, typically Security-as-a-Service, but also enriched functionalities such as network and resource allocation.

More and more people and businesses are storing their data and deploying their applications in Cloud computing infrastructures that offer the advantage of powerful, flexible and inexpensive computing resources. The massive adoption of these infrastructures that concentrate sensitive data and applications makes them a prime target for IT attacks, hence the importance of security monitoring in the Cloud. This article introduces NoGap, a new security monitoring technology that operates from the Cloud infrastructure. NoGap was demonstrated at the Orange Research Exhibition.

In the architecture of a Cloud environment [1], as shown in Figure 1, there is at least one server with physical resources on which a virtualisation software layer (hypervisor) [2] runs, which allows these resources to be shared between different virtual environments belonging to different Cloud users. These environments known as Virtual Machines (VMs) run simultaneously on the same physical server and each of them runs an Operating System (OS) and multiple applications just like a physical machine. Our technology presented at the Research Exhibition focuses on the security monitoring of these VMs.

In a Cloud environment, three approaches to VM security monitoring are possible [3], two of which are traditional. These approaches are illustrated in Figure 2:

Figure 2: Security monitoring in the Cloud

First of all, the so-called “host-based” approach, representative of an antivirus. In this case, the monitoring entity has excellent visibility of the VM’s activities, it sees everything since it is inside the VM. So it analyses the VM’s activities and detects those that present a malicious character. On the other hand, the security monitoring entity is not isolated from the VM since it is inside it, therefore it is also exposed to attacks on the VM.

A second “network-based” approach, representative of a firewall at the network level, consists of examining the information exchanged via the network between VMs to judge their security. This time, the position is reversed. The security monitoring system is correctly isolated from the VMs because it is located outside of them, but its visibility of the VMs’ activities is reduced since their security must be judged solely on the basis of visibility of network packets.

Finally, there is a third way of security monitoring, thanks to virtualisation [2]. In this case, we examine the footprint left by the VMs’ activity at the hypervisor level to judge their security. This time both criteria are correct. The security supervision system is correctly isolated from the VMs since it is at the hypervisor level, therefore outside of them, and it has good visibility of their activities since the hypervisor is interposed between the VMs and the resources they consume.

On the other hand, the hypervisor sees everything but, simply put, “doesn’t understand anything” because it sees the VMs’ activities as 0s and 1s through a raw view as shown in Figure 3. However, to supervise VM security, the hypervisor needs a semantic view, i.e. a rich view that takes into account processes, files, system calls, etc. This gap between the raw view available to the hypervisor and the semantic view it needs to monitor the VMs’ security is called the “semantic gap” and this is the issue that needs to be solved for this hypervisor-based approach. Our NoGap solution solves this challenge and bridges the semantic gap [4]. 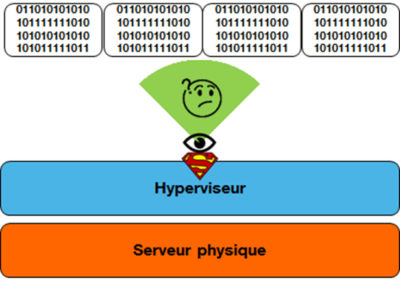 To bridge the semantic gap, NoGap works in two stages. During the first stage, NoGap identifies the addresses and names of the kernel functions in a VM’s memory and then, during the second stage, it instruments them (i.e. intercepts, calls or analyses them) to get semantic information about the VM’s activities and data.

The first issue with this approach is that the location of the kernel code in the VM’s memory is unknown to the hypervisor because, on the one hand, it is dependent on the type and version of the OS running in the VM and, on the other hand, it changes randomly when the VM is restarted for security reasons. The second issue is that there are no specific instructions that mark the start and end addresses of a function.

Therefore, the main challenge in the NoGap approach is to identify the addresses and names of kernel functions in the VM’s memory in a fast, automatic, OS-independent (generic) way, without prior knowledge of which OS is running in the VM’s memory (black box). All these properties are required to deploy this kind of technology in an Infrastructure-as-a-Service (IaaS) Cloud.

NoGap satisfies the properties required for deployment in an IaaS Cloud and identifies the majority of kernel function names and addresses in a VM (about 75% of functions on average). There is no state-of-the-art equivalent and the NoGap approach has been patented [7].

Example of a NoGap-based security application:

To illustrate how a security monitoring application takes advantage of the interception, calling and analysis of kernel functions from the hypervisor using NoGap, we have chosen to implement a hidden process detection application [8]. We emphasise that it is not so much this particular application that is important, but rather the way the security application works with the kernel function instrumentation possibilities offered by NoGap.

A hidden process is an active process that, due to a malicious modification of kernel data, becomes invisible in the list of running processes of the VM’s OS. So classic security and system administration tools that access this list will be fooled and will not see the malicious process running. To detect the existence of an active and hidden process in a VM, the approach implemented in this NoGap-based application example exploits the fact that an active process is inevitably periodically scheduled by the VM’s OS through a kernel function.

This example demonstrates that, through the identification then instrumentation of kernel functions through NoGap, the hypervisor becomes semantically aware of the VM’s activities that it sees at its level and is capable of detecting an intrusion and reacting to it.

NoGap makes it possible to produce a semantic view of the VM’s activity from the hypervisor and to expose this view to applications, in particular security applications that exploit this view to detect intrusions, for example. It can therefore be said that NoGap, thanks to the identification and instrumentation of kernel functions, makes it possible to have a Cloud infrastructure that is semantically aware of the activity of hosted environments. This makes it possible to envisage two families of NoGap applications. First of all, new services based on the hypervisor, typically Security as a Service, but also perhaps to enrich, thanks to semantics, the functionalities that are incumbent on the infrastructure, such as the network and resource allocation for example.

How to leverage the dormant resources of private datacenters 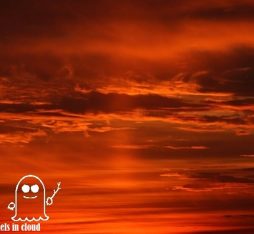