CES 2021 characterised by the pandemic

“The rise of remote working has led to thinking up more immersive videoconferencing experiences.”

The 2021 edition of CES was particular in both style and content. Due to the pandemic, the Las Vegas CES was held entirely online this year, with the digital version losing much of the charm of this prestigious gathering of all things digital, one of the main attractions of which consists in wandering from stand to stand to discover promising new startups. The public health crisis weighed heavily on the organisation of CES and influenced the innovations presented.

The rise of remote working has led to thinking up more immersive videoconferencing experiences. With Meeting Owl Pro, Owl Labs offer to film and capture the sound of a meeting room over 360° then to focus on whomever is speaking. Thanks to a 3D camera placed on the ceiling, MorpheusTK ensures that participants respect social distancing measures.

Also in the area of 3D, Imverse creates a volumetric representation – unjustifiably called a hologram – of participants. As for French company Klaxoon, they unveiled a collaborative solution that brings together a visual management interface, hundreds of ready-to-use meeting models, and a videoconferencing tool. Its Smart Work : Board can also be integrated into market solutions such as Microsoft teams, Google Meet, Zoom, or Webex.

For its part, Nextro is marketing the Admiror II, a laptop aimed specifically at teleworkers that includes three webcams so as to film people close-up, medium-range and with a wide angle, as reported in Le Monde. Lighting around the screen provides a flattering image of the person being filmed.

In terms of mobility, 2021 will be the year of the democratisation of 5G. Xiaomi is contributing to this with the Redmi Note 9T, a smartphone that is compatible with the new mobile communication standard and that costs less than 300 euros.

CES was also the chance to discover or in fact rediscover – some models already being on the market – devices with innovative formats. TCL and LG both presented smartphones with rollable displays. TCL revealed a display that rolls out like a scroll, and LG a mobile telephone with a swivelling double screen in the shape of a T, the aptly named LG Wing. One step ahead in the game, Samsung presented the evolutions of its Galaxy Z Flip 3 and Galaxy Z Fold 2, devices that fold in two, with the latter also turning into a tablet.

Digital transformation goes hand in hand with ecological transition. In the area of transport, CES showed that electrification concerns a growing number of vehicles. The phenomenon has now reached pickup trucks (Rivian), delivery vans (Cenntro Automotive), coaches (Van Hool), and even the Hummer (General Motors). Sono Motors presented an electric SUV or rather SEV (solar electric vehicle) as it is powered by solar panels.

Another trend: the extension of autonomous vehicles to a great many uses such as haul trucks for mining with Caterpillar. Also, Chinese startup WeRide has raised 310 million dollars to develop autonomous buses.

In the world of drones, Uber has confirmed the acquisition of its flying taxi activity (Uber Elevate) by startup Joby Aviation. As for Verizon, they are working with UPS Flight Forward on the delivery of retail products by smart drone.

A modular and urban farm

In the environment field, CES put the spotlight on the concept of urban farms. Korean company N.thing promises to grow high quality vegetables in any environmental conditions. Its modular farm (The Cube) is made up of shipping containers that are stacked vertically or horizontally.

Due to the covid-19 context, innovations in the area of healthcare are being aimed at reinforcing health protocols. UBTech has designed an autonomous robot, Adibot, that disinfects offices using UV lamps. WavePlus, the sensor by Airthings, analyses air levels of carbon dioxide and humidity as well as temperature, so therefore potentially the probability of virus circulation. BioIntelliSense goes even further by providing an adhesive tracker to be worn on the chest, the BioButton, which detects initial symptoms of the coronavirus.

Razer, who specialise in gaming accessories, have imagined an FFP2-type protection mask equipped with a fan and a UV-based sterilisation device. Lastly, Swiss company CleanMotion offers a self-disinfecting door handle.

Finally, in the area of Tech4Good, the NUVI Lab food scanner analyses the type and quantity of food consumed and provides advice on nutrition. L’Oréal proposes to reduce hair-washing-related water consumption by up to 80 % by integrating shampoo directly into the water. Last but not least, the Lasso smart bin from the UK-based startup of the same name sorts, cleans and grounds down recyclable waste.

– Video of the Meeting Owl Pro camera by Owl Labs

– Video of the MorpheusTEK 3D camera

– Video of the volumetric representation of meeting participants by Imverse

– Video of the TCL smartphone with rollable display

– Video of the LG smartphone with rollable display

– Test of the LG Wing by French website Nextpit

– Melty article (in French) on the Samsung Galaxy Z Flip 3

– C/net article on the modular urban farm concept by N.thing

– Video of Wave Plus, the Airthings sensor

– 9News video report on the BioButton anti-covid device by BioIntelliSense

– Cnetfrance article on the anti-covid protection mask by Razer

– The website of CleanMotion who sell a self-disinfecting door handle 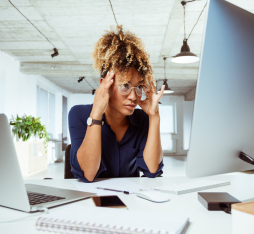 Eye Health at Work Supported by a Chatbot 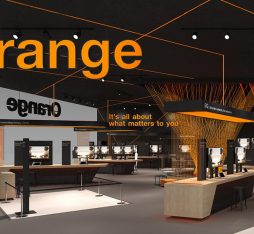