Jérôme Colombain: We’re here to talk about the future of mobile telephony and, in particular, about the future of 5G. Well, the near future, that is. In France, 5G emerged one year ago now, but we know it has not yet reached its final form. The “true” version of 5G is what we call Standalone 5G — pure 5G.

We discuss this with Arnaud Vamparys, Senior VP Radio Networks for the Orange Group. Hello.

JC: So, 5G obviously already represents an evolution from 4G. But how will 5G itself evolve, Arnaud Vamparys?

AV: Well, there are two steps when it comes to introducing 5G. Firstly, there’s a type of 5G that is linked with 4G, which is called Non-Standalone 5G (NSA 5G). Let me explain: It involves installing smarter antennae in transmission equipment on roofs and masts. These antennae don’t provide blanket coverage at all times, but rather just when they’re used, where they’re used, for higher efficiency, increased bandwidth, better customer experience and lower energy consumption.

That was the first step. Then, from there, we’re working on the evolution of 5G to SA 5G (Standalone 5G), i.e. independent of previous generations. We get one per decade. We had 2G, 3G and 4G, we’re preparing for 5G, and we’re researching 6G and the evolution of 5G into SA 5G. We’re going to have a new core network. That is, a network where all of our customers’ data flows. We’re completely overhauling this element.

JC: So what you’re saying is that, today, 5G relies partly on existing infrastructures linked to 4G. And the idea is to break away from them to further boost efficiency.

AV: Yes, that’s the second step. We have three parts that need to be changed: (1) database, (2) signaling and (3) customer traffic. We’re renewing the whole lot using cloud-native technology, meaning we can separate the software from the hardware. You can put the different network elements on one common infrastructure, on the same servers. This means that it’s a pure form of 5G, where we’re no longer forced to use elements of the previous generation. In addition, it enables us to work with a concept called network slicing. This allows for differentiation between different levels of service quality and security.

AV: Yes, we virtually slice the network into different portions. Just like it says on the tin. And it’s already very much in demand from businesses.

AV: Because it enables them to adapt connectivity to their needs. Sometimes they need bandwidth and other times they need very quick reaction times, and so we already have a high demand, right now. And at Orange, we’re already making SA 5G networks — on private networks such as on industrial sites. We’re gradually going to be rolling this out across the whole national public network. The preparation work is already underway.

JC: And this is what will help to prioritize network resources, in order to reserve capacity for certain carriers, for example. Maybe for emergencies or companies that pay more? What will that look like?

AV: Firstly, we’ll obviously ensure a standard baseline level of Internet service for everyone. But it allows us to address more specific needs. Indeed, it could be for emergency vehicles, or for police forces on the same network. But also for any companies that need to have a guaranteed level of connectivity.

In fact, we’re connecting more and more objects to our networks. We’re recording a 40% growth in new usage every year. And, what’s interesting is that they have a very wide variety of characteristics. There is no one-size-fits-all approach for connecting sensors, object controls, smartphones or HD cameras to a mobile network. We have many on-the-go use cases. But we also have people who use the mobile network as fixed wireless access. And so we, as a carrier, have an even more adaptable toolbox to always ensure the best connectivity for each of our customers — consumer, corporate and wholesale alike.

JC: You use different technologies, including Open RAN. Could you tell us about what this is?

AV: This is another step where, once the various elements of the network core have been installed on the same infrastructure, we then want to do the same for all the signal processing. That’s where the access part comes in, and that’s the next step involving Open RAN. In fact, we at Orange have just opened the first Open RAN Integration Center in France.

JC: But what will this Open RAN bring?

AV: It enables us to do three things. To have a wide variety of vendors, since all interfaces are made compatible. Also, to gradually install the mobile access part on the same infrastructure as the core network. Additionally, to achieve better optimization, boosting the network’s intelligence. Secondly, I was explaining that antennae no longer provide blanket coverage at all times, but rather just when they’re used, where they’re used. So improving this “beamforming” aspect is important to us. It will help us to continue being number one on quality, which we were for 4G and we are for NSA 5G, in France and Spain, and which we will strive to be for SA 5G. And thirdly, it’s also about the ability to configure the network, and to do so truly in real time.

This is advantageous when it comes to slicing this beamforming network: You have to automate millions of parameters and be able to do it natively in the hardware.

JC: Could you remind us what beamforming is?

AV: Beamforming is exactly that concept, where the antenna doesn’t provide blanket coverage at all times, but rather just when it’s used, where it’s used. And so it’s important to have software capable of predicting the usage that we’ll have going through the radio cell. This will be a key way for carriers to stand out from the crowd.

JC: So, we’re really in the—I was going to say modernization phase, but no—in the evolution phase, and we’re finally going to achieve true 5G.

AV: That said, we already have a true 5G since we adopted the strategy for Orange to make a 5G that was distinct from 4G. We didn’t just want to put a 5G logo on it. Rather, we want to provide excellent operational convenience right now to those of our customers who have access to the 5G network, and especially when it comes to video calls.

JC: Then there is another evolution that has been highly anticipated: the transition to and the addition of new frequency ranges. I’m referring to the famous 26 GHz band.

AV: Yes, so maybe I can go over the different frequency bands that we have. We have low frequencies between 700 MHz and 800–900 MHz. These frequencies are very adept at providing signal both indoors and outdoors. So we have been using them since the days of 2G, which defined where we positioned the various sites—masts and roofs—for installing our antennae.

There is a second category of frequency bands: mid bands. They stretch from 1.8 GHz to 2.1, 2.6 and now even 3.4 GHz. That’s very close to what you use on your home WiFi. These frequency bands allow us to gradually provide our customers with more bandwidth. Given that we’re seeing usage increase by 40% every year, we have a growing demand and we’ve used these frequencies to ramp up capacity on the network, as we say, allowing us to have more clients and more objects.

Then, we’re going to have a third frequency band, which is much higher. This enables sharing of, for example, 10 gigabits locally, but it does not penetrate buildings well.

JC: Yes, its bandwidth is an advantage. But its range is the drawback.

AV: Yes, its range is only a few hundred meters and then doesn’t penetrate buildings well. However, it can be very useful in certain specific cases. For example, it’s currently being tested for use in train stations. With lots of people waiting in the same place at the same time, it could prove really useful.

Similarly, it could be highly practical on industrial sites, where there are many HD cameras in operation. It may also be really handy in a busy stadium: We will soon be hosting the 2024 Olympic Games in France. These frequency bands could be valuable in such contexts.

Of course, we always want to use the existing sites, where we already have antennae. So we may add this frequency band on an ad-hoc basis at certain sites, following a logical deployment plan. That might be for on-the-go but localized use, such as in a train station, or for fixed use in countries where the rollout of fiber still has a long way to go, where this technology can complement fiber technology. You still need a fiber connection to the mobile site.

AV: And then for businesses too.

JC: Are all of these technological developments carried out in-house at Orange?

AV: They are carried out thanks to a fairly broad ecosystem of industrial partners. At Orange Innovation, we have teams working on research, so prior to standardization. They have already begun working on 6G. In addition, we contribute heavily to standardization and then to testing with partners, all the way through to deployment in the Group’s 27 countries of operation. 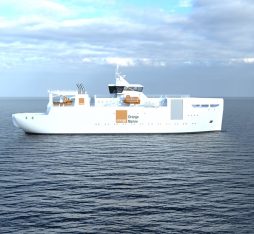