Protecting and Enhancing Our Inventions by Filing Patents

Jérôme Colombain: We will be looking at a slightly more abstract aspect of innovation: patents. In the case of self-driving cars, for example, Orange’s work relies on no fewer than six patents filed by the company. As such, this issue of patents and intellectual property is at the heart of the innovation process and is what we will be discussing with Lyse Brillouet, Vice-President Intellectual Property and Licensing. First and foremost: Why do you file patents?

Lyse Brillouet: Filing patents enables us to protect our inventions. It ensures that they are correctly recognized as our own inventions that we are able to integrate them into the products and services that we offer to our customers. And, more generally, in the world of telecoms, patents are often also associated with the standards and regulations that relate to our phones and networks, and which allow everything to work together. They mean that, regardless of the brand of your phone or your carrier, you can make calls freely, use apps, and so on.

JC: What types of patents do you file at Orange? What was the last patent you filed on behalf of the company?

LB: The most recent one was a patent in the field of cybersecurity, which, as you may know, is one of the Orange Group’s top priorities. In fact, we are lucky to be part of a company that is very diverse and that addresses different markets: the general public, companies and public bodies. We are very present in Africa and in Europe, so this gives us a wide variety of fields in which to protect good ideas and inventions.

So of course, we have our core business around the network, around mobile devices and around FinTech as well, with Orange Bank. We also have cloud cybersecurity, artificial intelligence and data. We have major engines in the Group. But we also have activities that are less well known, more inconspicuous. For example, we’ve filed patents on the tools used to fit fiber-optic cables.

When we install fiber for our customers, it is thanks to the inventiveness of our employees. This inventiveness underpins all our activities and we, the IPL department, are there to harness it and turn it into assets for the company.

JC: This means, for example, if I were an employee of Orange and I had a good idea, I could come to you and say, “I think we should patent this.” And as a side note, would it be patented on behalf of the company or under my own name?

LB: That’s a very good question. If we patent it, it will be on behalf of the company. How it works is that, depending on what you do at Orange, you either have or don’t have an ‘inventive’ role. It’s written in the employment contract of everyone with an inventive role. For example, researcher inventors — inventing is an intrinsic part of their job, of their role, so their inventions belong to the company.

For people who are more removed from the field of invention, we discuss it with them and see if their good ideas are worth filing a patent for, since filing patents isn’t cheap. There is the initial filing, which costs several thousand euro. There’s also the time aspect of the patent to think about. Patents are a bit like pharmaceutical products. In fact, patents are valid for 20 years. But it takes five to seven years for them to be granted in the country of filing. You file a patent, and then it may even be valid for an additional five years after it expires if you can show that it was used fraudulently during its life span.

So, patents have a very long lifespan. You need to add up all the costs that go hand in hand with all those years. You may have some assets that are really high-value for the company, but that’s not the case for all patents. Some might be transferred, some might get abandoned. They won’t all last 35 years.

JC: So what you’re saying is that patents are assets, so to speak. They’re really part of the company’s legacy. Are they also something that you market?

LB: Yes, it’s important to know that we can also license them—the inventions that we protect—to third parties; this is important because it means that, after the company has invested in the patent, it then has the opportunity to bring in revenue. But again, this has to be for a fair price, because we are talking about the fruits of lengthy efforts to fine-tune these standards and regulations, which takes years, or sometimes even decades.

So we can collect royalties on these patents. But again, we really have to view and understand it as a return on investment, done almost for free at the time, in order to produce standards and regulations that are open and accessible to all and that truly make each innovation as shareable as possible.

JC: There is strong competition for patents across the world. The US giants, GAMAM (Google, Amazon, Meta, Apple and Microsoft), file thousands of patents. How do you measure up to that?

LB: It is true that GAMAM, like manufacturers—and especially Asian manufacturers—file a lot of patents because it is also a way of making a show of force in relation to their mastery, or the legitimacy, of a particular technology. Indeed, European carriers are still struggling to keep pace with the sheer number of patents filed by, for example, Huawei in its prime. Let’s say you have a portfolio of more than 45,000 patents filed; that’s more than 10 to 20 patents per day. Clearly, that doesn’t make sense for us. Our actions needs to be aligned with our strategic interests: Will we also be able to create revenue on these patents? And is there a point to it? Are these patents robust and of high value? Since there are many legal disputes in the intellectual property world nowadays, we also need our patents to be watertight. Take the phone industry, for example. Some players protect everything, right down to the tiniest screw. Really, this patent war is based on industry-specific details that you could never even imagine.

JC: And then it leads to endless litigation.

LB: Yes, indeed, that can happen. There are so many cases going on around the world.  It all started in the United States. Now it’s skyrocketing in Europe. There is no question that we are attractive targets for litigation because we’re a major player who is in touch with the public. So that’s another risk in this patent war. Well, I don’t know if it’s really a patent war as such. But in any case, it is very competitive. It’s also a way of establishing control over the industrial ecosystems at play, so it’s important that we, as carriers, can protect at least some of our inventions, which form part of our assets, in order to preserve some form of sovereignty and decision-making capacity, and to continue to be part of this hyper-competitive global ecosystem.

JC: But are all patents actually useful? Aren’t some of them just for show?

LB: Look, that’s a very good question. At Orange, all patents are useful. But before we go back to our particular case, in reality there are some practices that are a little ‘unfair,’ where companies sometimes file a huge number of patents because it might put them at the top of certain rankings, for example, but then they won’t necessarily keep all the patents.

This takes us back to the financial aspect. The cost of filing patents is relative. What ends up being done with the patents down the line? That’s just not our way of doing things at all. We are extremely rigorous about the patents that we file. In particular, do these patents relate to an area where there is already some prior work? Or has any research on it already been published? We’re really meticulous about it — we only patent things that are completely new to us. And these legal disputes revolve around analyzing the patents based on their merits, so it’s really all about logic. Really, we’re in a patent war waged over technical details, and having done all this due diligence when drafting patents allows us, alongside our attorneys in these trials, to have an extremely solid defense.

JC: There is a trend, especially in the digital sphere, toward open source. That’s the antithesis of a patent. It’s more about “let’s share all of our knowledge.”

LB: It’s not necessarily the antithesis of a patent. In fact, the two aren’t mutually exclusive. True, open source is a very interesting approach, because with initiatives that don’t necessarily have the proper support of a strong industrial ecosystem, it enables us, via partnerships and community, to reach critical mass and thus to open up markets, open up industries and go faster while pooling our efforts. Moreover, we know how eager researchers are for this type of collaborative work, which fosters open cooperation with other types of stakeholders. This is what GAMAM particularly excels at — having foundations that are developed collaboratively and then made available as open source. And then we can have, on top of these foundations, specificities, applications, details and additional features, which don’t necessarily have to be shared in order for the foundations to make sense and which, at that stage, can be protected by patents. This enables those who contribute to open source while also filing patents to get the best of both worlds: actively participating in the development of the open-source ecosystem while, at the same time, having the opportunity to generate an additional return. And this, compared to simply the hint of inventive input that they would have had on particular feature if they had acted alone. And this is a very important point to grasp because it makes it much easier for us to seek out alliances or to work with third parties.

But it also allows us to pay close attention to what would make a difference and to what can also serve the interests of the company, without undermining the contribution to open source. After all, in a way, our mission is to harness our expertise and ensure that we can continue to contribute to this type of research for a long time to come.

JC: Great, thank you very much. It’s all very exciting. Lyse Brillouet is Vice-President Intellectual Property and Licensing at Orange. 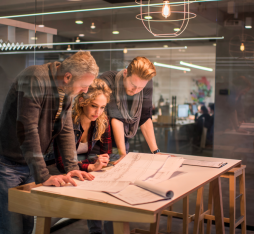 Infringement: an issue at the heart of intellectual property

Intellectual property, a marker of innovation