Ecosystems, natural forms, processes, and materials... Nature is a treasure trove and biomimicry invites humankind to seek sustainable innovation from its various sources of inspiration.

Biomimicry offers tangible opportunities for the future, and is the act of using nature-inspired solutions to solve human challenges posed by societies, whilst reducing material and energy consumption. France is already committed to making energy and environment transitions, and is showing increasing interest in this multidisciplinary approach. For the second year in a row, it will host an event dedicated to the fast-growing discipline of biomimicry in Senlis (Biomim’Expo, 29-30 June 2017).

Amongst the 171 public research laboratories working on biomimicry related topics in France, 15 are engaged in the fields of robotics, complex systems and information processing (according to an assessment by the European Centre of Excellence in Biomimicry of Senlis).

From ant to algorithm

Researchers from Dr Guy Theraulaz’s team at the Paul Sabatier University of Toulouse, (Research Centre on Animal Cognition), are studying the collective intelligence of ants to develop algorithms used in the fields of robotics, information technology and telecommunication.

The team is developing models based on the filtering of information driven by the behaviour of social insects. The objective is to increase the reliability of information (for example, that used for recommendation algorithms on e-commerce or booking websites) and to increase proficiency in collaboration, cooperation and collective information research.

The research also focuses on animal perception capabilities. By observing the behaviour of certain types of fish (primarily the elephant-nose fish), Frédéric Boyer’s team (Nantes Digital Sciences Laboratory and the Institut Mines Télécom) have developed an “electrical sense” which enables underwater robots to recognise the shape of objects and move them around more easily. Currently, a European project aims to introduce a swarm of collective underwater robots incorporated with this electrical sense to monitor the canals in Venice.

Crickets; a source of inspiration

Have you ever seen two flies collide? With this in mind, Stéphane Viollet, Research Director and head of the bio-inspired robot team at the Institute of Movement Sciences (CNRS/Aix Marseille University) has developed the first artificial eye which resembles that of a fly. This high performing compound eye, named CurvACE, gives aerial robots a unique panoramic vision thanks to hundreds of individual pixels. The project, which was launched in 2014, paved the way for obstacle avoidance applications installed in home automation systems, vehicles and even in robotics.

In the realm of insects, crickets are a constant and incredible source of inspiration for scientists… Endowed with highly sensitive sensory hairs, they can rapidly evade an attack from a predator.

This unusual performance prompted Jérôme Casas, of the Institute of Research on Insect Biology, to develop flow-sensor arrays which exhibit the same chain of information processing uniquely developed in the sensory hairs of crickets. The long term goal is for these sensors to be used in the field of technology, for example, in flow sensing cameras, or in medicine.

A rather useful parasite

And what can be said for the wasp, or more precisely one of its parasites… For researchers in optical instrumentation at the French National Office for Aerospace Studies and Research, the eyes of the Xenos peckii parasite were a source of inspiration for the structure of the Multicam. In optical technology which has been used in imaging in astronomy and military intelligence, the Multicam camera is a stack of arrays of micro lenses, which form a set of juxtaposed micro-cameras. This makes for a very compact, fully integrated assembly close to the infra-red lens, to provide large images with very high resolution. 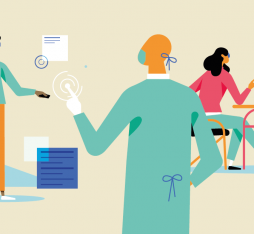 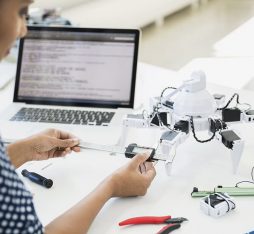