IFADEM: Sustained practices after a mobile based teacher training project 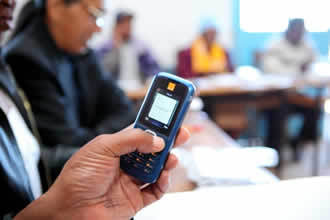 In 2009, Orange has partnered with the Organisation Internationale de la Francophonie (OIF) and the Agence Universitaire de la Francophonie (AUF) to launch the Malagasy version of a distance – training project for primary school teachers: IFADEM. The project, which had already been implemented in various African countries, seeks to provide teachers with pedagogical methods and improve their own French skills in the meantime.

Distance training is considered by Madagascar as a key strategy, as the country has been facing major challenges in the area of teacher training: Indeed, the country is institutionally and financially unable to provide pre-service and in-service training to all teachers, be it the large number of untrained community teachers or civil-servant teachers who have often not received any training since decades. In order to keep the Universal Primary Education (UPE) rates increasing – number 2 of the Millennium Development Goals decided at the Dakar Forum in 2000 – and stop the decrease of quality – shown by the worsening results of international examinations as PASEC – , a training scheme which allows to train teachers without taking them out of their classrooms is of particular interest for Madagascar.

Throughout the project, 436 teachers and 22 tutors took part in the pilot training from September 2012 to May 2013. The training was characterized by a hybrid training scheme, introducing for the first time the mobile phone as key tool of the whole training process.

More precisely, the training was composed of:

At the end of the training scheme, in late 2013 and early 2014, evaluations and assessments were conducted in order to analyze to which extent teachers had benefitted from the training and identify the role that the mobile phone had played throughout the training phase. The lack of pre-tests and absence of a control group made it difficult to assess the impact of the training on French skills and teaching methods. While only 9% failed in the theoretical and practical evaluation at the end of the training, various results of the evaluations contain indicators that the French level of teachers remains very weak and that the pedagogical practices taught were often misunderstood. However, evaluations already showed the importance of the mobile phone for teachers:

Around 18 months after the end of the training, in March 2015, a field mission to Madagascar was conducted. The goal of this visit to former participants was to identify if there were any contributions and impacts after the end of the training, and if so, what kind of impacts.  In light of the fact that teachers had now to pay for the refill of the credit themselves, we were interested in assessing what kind of already observed mobile usages sustained and what kind of newly identified usages could be observed.

A sequential mixed – method research approach was chosen, including the analysis of secondary data, the conduction of semi-structured interviews and the analysis of call-protocols.

The results of our research confirm that the distributed mobile phones still play an important role for teachers – both for work and their private life and comes to the conclusion that all observed impacts which appear to sustain even 18 months after the projects are related to the mobile phone and have not been planned as such by the project implementers: 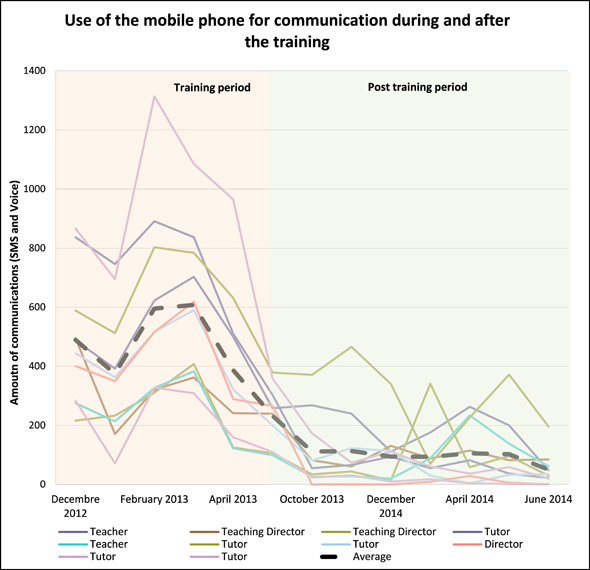 The research shows that there is a real contrast between the weakness of intended impacts, and the large amount of unexpected, but sustainable contributions for teacher’s work and private life.

What kind of sustainable mobile usages can we really expect? What do we have to do to encourage these usages?

While the phone was only a provider of content (audio files) and intended for communication, it does not make sense to criticize its function for the weak impact on the pedagogical practices and French skills. These results show rather how difficult it is in general to change teaching practices, and how important it is that the content of the training is well understood in order to convince teachers about the usefulness of the new methods.

Indeed, usefulness appears to be a key word when looking at all unexpected contributions that could be observed 18 months after the end of the training project. All those sustained usages that were declared and observed are usages that are perceived as utile by teachers, meaning that the phone facilitates tasks and enables them to increase the efficiency of processes.

At this stage of the research process, our results allow us to retrieve two major lessons that can already be applied to similar mobile based training projects

Firstly, it appears clearly that there is a need for user centered, participatory project approach. The interviews showed that teachers had innovative ideas, but they were considered solely as “beneficiaries” not as interlocutors or field –experts, which they regretted.  Ultimately it appears impossible to exploit the potential of a mobile phone if the perspective and needs of teachers are not considered and valued on an ongoing basis, throughout the design and implementation phase.  Research (Henson, 2000; Stringer, 2008, Mitchel & De Lange, 2013) has shown that all parties of a development project benefit when the actual beneficiaries who can influence on the design process and are encouraged to think “out of the box”.

Finally, even though it appears clearly that the potential of the technology depends on the way the latter is embedded in a project, it is important to ensure that the chosen technology – the mobile phone – is also user centered and accompanied by a profile – adapted training: The research findings show clearly that the usages of the mobile phone, and the degree of sustainability of these usages, differ from the profiles of users and their technological skills. It is important that teachers are introduced to the multiple function of the phone, not only to those who appear to be the most important for the training project. The training has to be adapted to their profiles in order to stimulate as much as possible their willingness to use the phone and explore new services.

The upcoming launch of the teacher training initiative FADEP.MG, which is similar in its patterns to the IFADEM project, will provide us with an interesting research ground and allow us to continue our research based on these unexpected findings. Indeed, our research results call for more in depth research on the potential and impact of mobile technologies on administrative tasks. As the research community acknowledges that in many rural African schools administrative tasks contribute negatively on teaching tasks (UNESCO 2014, citing SACQMEC and PASEC) it appears important to identify how mobile phones are spontaneously adopted by teachers in order to reduce their non-pedagogic workload. Furthermore, it appears crucial to investigate to which extent mobile based training projects enhance spontaneously peer communication and collaborative learning dynamics (Cortez,et al., 2004;) and how these evolve in time and outside of the training scheme.

Finally, the discrepancy between actual project goals and observed contributions calls for more research on the importance of user centered approaches and how these contributed to sustained usages. While their importance of collaborative mechanisms is acknowledged by the research community, the actual impact on training outcomes and the reasons for their absence in many training projects needs to be further investigated. More precisely, we will research the organizational scheme of the future FADEP.MG project in view of identifying the relationship between mobile based usages and project design and implementation processes.

Mitchel C. and De Lange N. 2013. What can a teacher do with a cellphone? Using participatory visual research to speak back in addressing HIV & AIDS. South African Journal of Education, 33 (4).

Henson, R. 2001. The effects of participation in teacher research on teacher efficacy; Teaching and Teacher Education, 17 (819-836).

The  Southern and Eastern Africa Consortium for Monitoring Quality in Education(SACQME): http://www.iiep.unesco.org/en/our-expertise/sacmeq 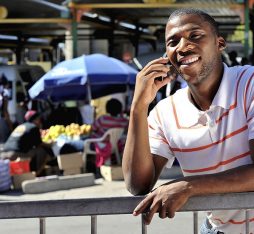