They want to help individuals engage in sustainable behaviour by using digital technologies and thus reconcile market sector and societal commitment. “Transition techs”, this new kind of startup, are for the most part led by experienced entrepreneurs. An online study of one hundred and twenty facilities as well as semi-structured interviews carried out with nine of these project leaders show that these new structures implicitly adhere to environmental objectives, but without opening up the traditional debates of defining priority issues and responsibilities of the different stakeholders (public authorities, economic sectors, etc.). Another common characteristic: all the while pursuing a goal of general interest, a large majority wish to stay away from activism and associations. Their stance is explicitly positive and pragmatic. Based on revenue models that are currently under construction, “transition techs” are small teams. Monitoring this emerging sector is essential for the Orange Group, already involved in an energy sobriety approach, in order to be able to accompany its customers on their own path of ecological transition, by supporting the most promising enterprises where necessary.

New and hitherto relatively unnoticed players seek to help individuals adopt sustainable behaviours using digital technologies, thus reconciling commercial imperatives and social responsibility. Who are these start-ups that we have called “transition techs”, by analogy with civic techs? Which environmental issues do they intend to tackle? With what technology and what business models? Is their world already stable, or is the movement still in its infancy?

An online study of one hundred and twenty initiatives and semi-directive interviews, with nine of these entrepreneurs (Table 1), provides some answers to these questions. 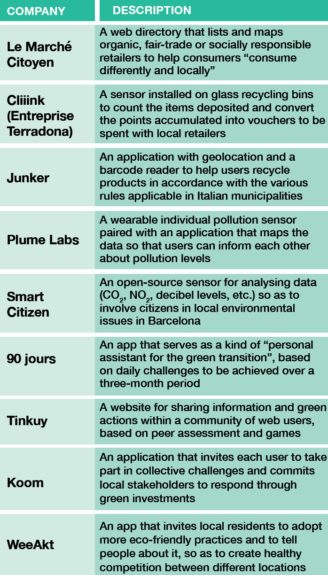 Leaving aside the speciality – specific or otherwise – on which they focus (pollution, waste, shopping, etc.), these players can be categorised using two criteria (Figure 1). The first is the kind of action the service is seeking to achieve: does it simply provide information for interested users who already want to change their behaviour? Does it offer participation tools for convinced and motivated users who lack the means to organise collective green actions? Or does it constitute a real incentive to act, providing much-needed guidance towards sustainable behaviour for the least eco-conscious individuals? The second is the technology chosen, the three main options being websites, databases and sensors. While all the start-ups use a website, only two have built their service around a newly created database: Le Marché Citoyen, which offers a geolocated database of sustainable retailers and services in map form (11,000 listed providers at the time of the interview) and Junker, which matches recycling instructions with product barcodes (1 million products referenced). Three players use sensors: Plume Labs and Smart Citizen to measure atmospheric pollution, and Cliiink to check that the waste deposited for recycling is indeed glass.

The projects covered by our study are all led by men, ranging in age from 24 to 60, but most of them over 35. Many of these initiatives were set up by a pair or trio composed of, as in all start-ups, one or more engineers, but also of people with more atypical backgrounds than the usual business school graduate, including multimedia graphic design (90 jours), local project management (Koom, Marché citoyen), urban planning (Smart Citizen), and computer science followed by philosophy and sociology (WeeAkt).

These founders had already had previous professional experience when they started their project, and in six of the nine companies we spoke with, at least one of the founders had done jobs related to sustainable development. In the three others, the founders seemed to have no natural inclination to invest in this sector. There was therefore a decisive encounter in which those with no background in sustainable development crossed paths with someone who aroused their interest in the subject.

Whether they are tackling a precise problem such as intensifying glass recycling (Cliink) or seeking to bring about a more general change in consumers’ routines, the business leaders we interviewed subscribe implicitly to environmental goals, without opening up the traditional debates on priorities and the responsibilities of the various stakeholders (public authorities, economic sectors, etc.). De facto, but without ever using those terms, all of them are thus pursuing an objective that serves the common good and trying to lead a meaningful project:

“I have always tried to invent things that serve, not a cause, but something I find laudable. I am not an obsessiveenvironmentalist or anything, but I do like the idea of doing something that has values.” WeeAkt.

They thus place the emphasis on higher goals that are not necessarily solely environmental, but may also have a more general economic and societal scope: the founder of Terradona/Cliiink mentions territorial development (creating local employment, innovating in France, etc.), while Smart Citizen intends to promote an alternative vision of the smart city.

A POSITIVE APPROACH BASED ON PRAGMATIC COMMITMENT

Another shared characteristic is that, while pursuing an objective that serves the public interest, the vast majority try to keep their distance from activism and associations. Most are not “environmental activists” and even deny being “environmentalists” of any kind. In their mouths, these two terms evoke ineffectiveness – “The activists didn’t know how to find the money to keep it going,” says one of them – or even an archaic approach. Asserting their identity as digital entrepreneurs allows them to distance themselves from such an image.

In keeping with this, they deliberately adopt a very positive stance, shunning approaches based on finger-pointing, demands or resistance, which them deem ineffective or even counter-productive. “We could make the subject of pollution interesting, fascinating even, and really capture people’s imagination, if we did it in a quirky, positive way without any mea culpas or saying ‘it’s awful, we’re all going to die’.” Plume Labs.

This positive line is also pragmatic: by choosing to support changes in their users’ routines and encourage little green gestures, they all see themselves as espousing common sense, on the principle that “from small streams mighty rivers flow”.

BUSINESS MODELS THAT ARE STILL LOOKING FOR EQUILIBRIUM

Like all start-ups, the projects studied often experiment with revenue models on a trial-and-error basis, on both B2C and B2B markets. On the B2C front, Plume Labs and Smart Citizen should have a direct revenue stream from the sale of connected devices (distribution of the “Flow”, the Plume Labs sensor, is scheduled for June 2018 and the Smart Citizen is out of stock pending the arrival of a new version more accessible to the general public). This is also the case for the 90jours “premium” model. In terms of audience model, all of the firms face the classic difficulty of the web economy: attaining a critical mass of users.

Despite respectable volumes for some, they are unable to generate a sufficient revenue stream from monetising their audience. At the time of the interviews (June-September 2016), the interviewees gave the following figures: Tinkuy, several communities of 10,000 people; 90jours, 100,000 accounts; Le Marché Citoyen, up to 100,000 visitors a month in 2012; Koom, 8600 users; Plume Labs, 50,000 active users; Weeakt, 6000 users. On the B2B front, they are seeking to monetise the individual changes in behaviour that lie at the heart of their project, be it through SaaS or white-label software sales, or by providing services to businesses and local authorities. Even though these mediated services do not mean abandoning a direct presence on the B2C market, they are the main source of revenue for many of these companies. Tinkuy, for instance, operates on behalf of Humanité Diversité (Hubert Reeves) and Orcelant (Vincent Bolloré), as well as conducting fixed-term campaigns (Higgins, Ladurée, Afnor). This search for corporate or institutional clients is particularly difficult when the players involved turn to local and regional authorities, which are organised in a way and take decisions at a speed that would appear incompatible with the constraints of a young company.

For the moment, these revenue models are still works in progress, and this general economic fragility is reflected in the businesses’ small workforces: the largest had a team of 17 at the time of the survey (2016), with few full-time and/ or permanent employees – and the low pay the innovators award themselves. While it is normal for directors not to be able to pay themselves a salary during a start-up’s first few years, we see that period of unpaid work being prolonged to an unusual extent here.

These firms have to face a number of specific constraints that other start-ups do not. Raising funds from venture capitalists, for instance, is particularly laborious, with such investors reluctant to get involved in companies with a public-interest goal, from which they expect limited financial return. Another constraint, this time concerning customers, is the need for a growth strategy that is consistent with the objectives being pursued. Tinkuy says it has refused finance from Total in order not to displease its original user community, and describes reaction to its partnership agreement with Nouvelles Frontières as follows: “What? You send people away on holiday on planes? What kind of community is this?”.

LITTLE INTERACTION AND LACK OF COMMUNITY

The aim these entrepreneurs are pursuing, together with the fragility of their business models, is somewhat reminiscent of another family of public-interest start-ups: “civic techs”, which seek to improve democracy. But unlike civic techs, transition techs scarcely interact with one another. They do not meet up at shared events and are not located in dedicated incubators. It seems that the construction of a collective narrative is absent from their strategic vision for the moment. Only time will tell whether transition techs will choose to strengthen their business model to survive long-term, at the risk of straying from their initial public-interest goal, or whether they will, on the contrary, assert their identity collectively in order to attract investors and users. A necessary follow-up for the Orange Group, which is already engaged in an energy-saving approach, in order to be able to support its customers on their own path of ecological transition, by supporting the most promising companies where appropriate.