“Added to the ease of use is the pleasure to interact. A user is prompted to perceive the interaction with the interface as an interaction between partners,” Nicole Pignier, author of Designer le vivant.

Ub-y, the “in real life” robot

What will the interfaces of the future look like? A question that the daily paper already answers and where users have to appeal to their senses. One thing is certain: they will not (or anymore) look like a remote control or a controller.

A little over a year ago, the New York Company Ray released its Super Remote. Television, Xbox, DVD player or decoder: everything was controlled from the touchscreen of this remote control which falsely looked like a smartphone. Only problem: the life expectancy of Ray Super Remote was already low at the time of its release. There were already many more effective new interfaces. Yes but which ones?

Eye, hand, body, finger: anatomy of the interface of the future

Some consider the smartphone as “the remote control of our lives”, justifying the permanent use of the phone by the capacity that it offers us in managing an infinite possibility of tasks. “It is rather a passing point to communicate, work, seek information”, rectifies Nicole Pignier, University Professor, semiotician design specialist, co-director of the magazine Interfaces Numériques (Digital Interfaces), and author of the book Le design et le vivant (Design and the Living) to be published by Connaissances et Savoirs publisher.

A smartphone is still above all a hardware interface. However, innovations in this field seem to be moving away from the concrete, the physical. This is particularly the case with eyeSight technology, which offers sensory solutions to control ones household appliances, multiple connected objects and even ones car with a simple movement of the finger or eye.

Innovations that are already part of everyday life, in various forms: control by movement of the arms or head in video games; biometric recognition of confidential data, whether by fingerprint to activate ones telephone or by identification of the iris as on some passports; or even contactless payment with ones credit card.
“When we look at the history of design, the evolution of interfaces, we realise this growing tendency to use our different sensory memories, both in ergonomic and synaesthetic terms. Design requested an increasingly wide variety of gestural modalities. We see it today with tactile interfaces, in particular, Nicole Pignier explains. “Future interfaces will seem more natural and easier to manage, there will be no need to search for a remote control, there is a real potential practical aspect. The pleasure to interact will be added to the ease of use. The user will be called upon to perceive the interaction with the interface as an interaction between partners”.

So much so that some scientists – even some companies – talk about the advent of the “connected brain” by 2030, capable of merging the user with his/her uses. Manufacture an enhanced human, in a way. According to Nicole Pignier, it is certain that this technological possibility poses “a real ethical problem”. “The disappearance of interfaces, at least visually, makes us operate with them without realising it, no longer act knowingly, no longer be aware of our actions and their effects.” “The latter continues: To think that interrelationships in a company must be based essentially on storage, archival and responsiveness capacities means reducing or even denying the creative complexity of memory, consciousness as well as the existential bond that every human being has with his/her environment as well as others. If one thinks that human societies were built on this consciousness of existence of living beings among the living, connected brains are out of place.”

For the author of Le design et le vivant, a particular sector might however benefit from the contribution of such a technology: health. A question raised by the 2016 CES (Consumer Electronics Show), where companies such as BrianCo and OpenBCI were able to display connected headbands transforming the brain wave into electrical signals in order to detect potential pathologies or help patients suffering from Charcot’s disease. Make sure that limits are respected. New sensory interfaces, okay, but, Nicole Pignier concludes, “those that will make the user aware of what he/she is doing if he/she has to activate a machine, an interface. This threshold is very important because it guarantees the user, control over his/her actions and decisions”.

“Added to the ease of use is the pleasure to interact. A user is prompted to perceive the interaction with the interface as an interaction between partners,” Nicole Pignier, author of Designer le vivant.

Ub-y, the “in real life” robot 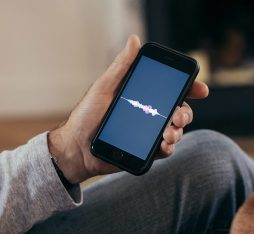 Interfaces that are more and more intuitive: joint interview with James Auger and Albert Moukheiber