It was in 1971 that Denis Gabor, a British physicist of Hungarian origin, received the Nobel Prize in Physics for the invention of holography. Unlike photography, which only reproduces shapes and colours, a hologram also records volume in three dimensions. Scientifically speaking, this technology splits a laser beam into two beams with the help of a reflective mirror. The first beam directly hits a photosensitive plate, recording a reference wavelength. As for the second beam, it encounters the object to be holographed before being reflected onto this same plate. The interferences between the two beams will thus enable photographic film to reproduce the volume. Once the plate obtained has been developed it must be illuminated with the same laser for the image to come out in 3D thanks to the diffraction of light. It becomes possible to rotate around the hologram as if it were a real object. Each part of the copy reflects the same quantity of light as the original when illuminated by the laser, which gives an impression of reality. Since its invention, hologram has mainly been used commercially and linked to show business.

First and foremost 2018 will celebrate the release of the first holographic smartphone: Hydrogen One, designed by RED, a company specialising in high-end cameras. Due to be on sale by the end of the summer, this mobile is equipped with a screen that is capable of displaying two and three-dimensional content. H4V mode needs to be activated in order to see the holograms appear in front of the screen. What’s more, the device will be able to take three-dimensional photos and display them instantly. It will also be possible to watch films in 3D without wearing special glasses or headsets. It is rumoured that video calls between two Hydrogen Ones may also be displayed holographically. Another improvement: the “surround” effect of the phone’s speakers, which give the impression of hearing sounds that are far away or that are getting closer.

Orange has launched the Holotennis experiment, the first experiment to enable a live tennis match through holograms. For the first time ever, during Roland-Garros 2017 two remote players could be on the Philippe Chatrier court together and hit a few balls. In 2018 the experiment was enhanced with holographic broadcasting so that spectators could follow the   matches in augmented reality.

Further holographic innovation will be available at the Tokyo Olympic games in 2020. Indeed the city wishes to place this sporting event under the banner of new technology and to achieve some world premieres. Additionally, certain events will be broadcast as holograms for the first time. A process made possible thanks to NTT DoCoMo, one of Japan’s telecommunications giants. Called “Kirari! For Arena”, this equipment is made up of a big cube with transparent sides, inside which real-size virtual reproductions of the athletes are projected. Spectators will thus be able to admire this process in indoor sports, be they martial arts or gymnastics. The advantage is that they will not need glasses or a headset to enjoy the karate, a particularly popular sport in Japan.

Another surprising technological development: when holography and artificial intelligence come together to benefit smart homes. We are indeed witnessing the appearance of virtual assistants in the form of holograms. For several months now, Japanese company Gatebox Labs has been selling a box, or “Gatebox”, containing the hologram of a young blue-haired lady called Azuma Hikari. Equipped with multiple sensors, the box is capable of transmitting a variety of information, such as outdoor temperature or motion recognition. Humanoid Azuma has also been designed to hold a conversation so that she can, for example, recommend the use of an umbrella. She can control a home’s connected objects, wake you up in the morning, or even send messages to mobile phones. For their part, the French people at Vivoka have developed Zac, a hologram in the shape of a raccoon who also controls the home, understands, and communicates. This assistant equipped with artificial intelligence is part of a home automation box that is piloted using voice via a 3D map system capable of managing all of a home’s equipment. Zac increases security thanks to his motion sensors, as well as his compatibility with cameras and presence detectors. The virtual raccoon also facilitates energy savings by recording power consumption of connected devices and automatically regulating them. Zac can also provide support to senior citizens by connecting with their smart pill dispenser or their personal alarm.

Even more surprising: the use of holograms in the healthcare sector. For example, using holograms, Researchers at American university UCLA have developed a technology to improve the process for diagnosing chronic diseases. The objective: to make tissue biopsies more efficient and accessible so as to detect cancers more quickly. This low-cost simplified process requires a microscope in a lens and a computer whose algorithms reproduce images of the samples taken. This enables patients in remote or developing areas to have easy access to these diagnoses. Furthermore, Microsoft has presented its holographic lens intended for surgical use. In 2018 in a hospital in Normandy, its HoloLens augmented reality headset (enabling the simulation of holograms) made possible the projection of a patient’s arteries onto the patient himself. Thus, the three surgeons (with the help of imaging company Oreka) were able to perform a faster, more precise operation on this coronary patient. In effect, the hologram facilitates guiding of the placement of the stent (vascular expander) on a blocked artery, or that of an endoprosthesis on a dilated artery (aneurysm). When it is necessary to cut open the neck to reach the carotid artery, the incision must be kept to a minimum. HoloLens is also used in surgical operations on patients suffering from kidney cancer. Other medical uses of holograms are conceivable, such as in cosmetic surgery.

And tomorrow? “Holograms will enable remote collaborative working“, anticipates Didier Duffuler, managing director of Oreka. “We are already seeing a new technique appear, which enables the projection of the hologram through a process based on blades. This process will therefore enable the coupling of the delivery medium with the projected hologram“, adds Stéphane Bertrand, founder of the company 3D Emotion. 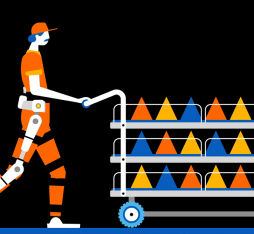 The new digital spaces of logistics