Future 20XX, the future in play

“The key characteristic of the approach is to ‘forget’ Orange and its own particular future at first, in order to focus on a larger concept – the world.”

Foresight – an intellectual approach that aims to anticipate the changes to our society as accurately as possible. It gets us thinking – what will tomorrow be like? The aim is not to predict the future. Instead, it seeks to shed light on the choices to be made in the present, the ones we are faced with today and whose impact will be visible in the medium or long term. Very widespread within businesses at the end of the 20th century, it gradually lost its influence on strategic planning under the strain of short-term pressure, with businesses now experiencing increasing difficulties anticipating a future considered distant and uncertain. Distant future? With climate change, the need to bring about the energy transition, increasing inequality and the ramp-up of political tensions, today’s world is changeable and unstable and the future could be viewed with fear. And yet, it is within precisely this environment that, more than ever, we should be asking questions about what the future could be like and about the kind of future we want, in order to guide our activities in the short term.

This premise was the basis for BlueOrange, a cross-functional working group within Orange whose objective is to rethink the way in which foresight is used and to share its tools and methods within the company. Two initiatives were born as a result: the creation of “Club Open Prospective” to share reflections and collaborate with other businesses and organisations, and the design of Future 20XX, an applied game for considering the future and the challenges facing citizens and employees. “We were convinced that in order for this forward-looking work to lead to action and generate results, it was necessary to encourage widespread involvement by sharing and involving as many people as possible in these matters. That is what led us to work on original, open and immersive concepts,” explains Philippe Michel, one of the game’s lead designers.

Future 20XX takes the form of a board game, with cards, handouts and a board, which brings all the elements together. The aim of the game? To imagine different possible futures, based on so-called structuring lines and fault lines: ‘bricks’ representing various structural trends or tensions that can currently be observed on the planet and within society. Based on their observations of the present, players then explore various world views, which are referred to in the game as ‘Development dynamics’. Future 20XX applies the principles of Design Fiction, which uses imagination and narrative to create visions of the future and allows these to be shared in order to assess challenges and consequences. Tested with various groups both internal and external to Orange, the initial prototypes of the game led to enhanced content.

In-house, the game is taken seriously

Within Orange, Future 20XX has served as the basis for a cycle of forward-looking workshops, the aim of which was to support work forecasting possible futures. As stipulated by the rules of the game, the participating employees started by immersing themselves into major future challenges before examining three different visions of the world. With the help of the game, they looked ahead to the year 2035 to imagine the world these three dynamics could foster. This was achieved by writing press articles setting out various aspects of these projections in concrete terms. The articles were then combined to create three fictional magazines, each representing a different version of the future: technological, collaborative, or even resilient in the face of a major breakdown.

More than a game, a genuine tool

The content of these three magazines has become an integral part of the game and helps participants to immerse themselves in the concept at the beginning of a workshop. That is not the only purpose it serves – these same articles are used by the BlueOrange team during a one-day seminar attended by nearly 500 Orange managers. Over the course of an afternoon, the managers began to reflect on the links between long-term challenges and short-term business practices. Future 20XX addresses various situations associated with increasingly ambitious objectives: it promotes not only team cohesion, but also the construction of a useful future vision to guide the actions of Orange.

See the world and not just the business

As well as being fun, Future 20XX has been designed as an additional means of supporting businesses’ strategic thinking. The idea is simple – a new global financial crisis or a one-degree increase in the global average temperature would have a greater impact on business than the launch of a new product by a competitor. For this reason, the applied game proposes an alternative approach. Whereas businesses tend to make future predictions by extrapolating factors in their direct environment, “the key characteristic of the approach we are proposing is to ‘forget’ the business and its own particular future at first, and instead focus on a larger concept and field of view – the world – which we seek to grasp in all its dimensions and complexity.”

Paving the way for new strategies

The holistic nature of this approach allows for reflection and promotes a better understanding of the mechanisms inherent in the system and its potential flaws. The visions generated by playing the game can then be used as raw material to address the potential impact on a business sector or on a specific situation in a less distant future. The approach is based on comparisons with the past, highlighting the changes that we are experiencing currently and speculation as to how these changes could materialise in the years ahead. It is by using these visions as context that we can better reflect upon the future of a business and enhance its strategic thinking.

A version of Future 20XX is available under a Creative Commons licence. It can be used by anyone wishing to implement game sessions within their business or organisation. The open licence under which this version runs allows both the use of the game as well as the ability to enhance the game, no matter the user. In parallel with the work carried out within Orange, the game’s content has already been offered externally. The CNAM has shown particular interest in this scheme in the context of its business foresight masters courses.

Various elements comprising this version, presentations and the tools required to organise sessions in your businesses will soon be accessible.
For more information on Future 20XX, please contact Philippe Michel: philippe.michel3@orange.com 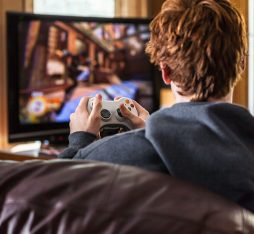